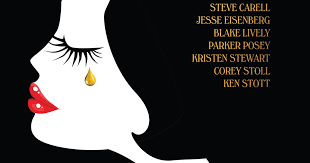 Familiar Woody Allen themes of infidelity and disenchantment color his newest film about a young Jewish man, Bobby (Eisenberg) who tries to strike up a life for himself in 1930s Hollywood. Things grow complicated as he falls for the secretary, Vonnie (Stewart), of his rich Uncle, Phil (Carrell) not knowing that the two are having an affair. Shades of The Apartment (1960) throughout the picture. Solid tragicomedy, middle of the road Allen film.