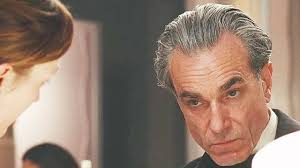 World-class British fashion designer, Reynolds Woodcock (Day-Lewis), lives a remote bachelor’s life, along with his sister and partner, Cyril (Manville). Meticulous and demanding as he is, the women come and go from his life, but things change once he meets a waitress named Alma (Krieps), who’s not prepared to leave without a fight. Somehow, at the point in the film when Reynolds and Alma’s affair grows most sordid, their story becomes a happy one, and it’s this shift that is at the heart of Phantom Thread’s mystery. Director Paul Thomas Anderson’s films are becoming increasingly elusive, and that trend continues here. I believe the title alludes to not just the hidden messages Reynolds hides in his dresses, but his inability to move past his mother’s death, as we see late in the film that he still sees her as a ghost tormenting him. Maybe this explains his reaction to Alma’s tricks. Maybe it’s not that he’s a masochist, but enjoys the mothering Alma provides. In any case, it’s a carefully observed piece from perhaps the best filmmaker working today and an actor of legendary stature who claims this will be his last role. For those looking for another scenery-chewing performance from Day-Lewis (referencing the masterpiece There Will Be Blood), you may be disappointed by this, a subtle, brilliant realization of Reynolds Woodcock. Vicky Krieps and Lesley Manville more than hold their own, as they prove to be real forces in the film. The gorgeous photography and various tracking shots point to the influence of Max Ophuls in Anderson’s work, an influence the director himself has noted. Finally, the music and score, the latter of which was provided by Johnny Greenwood, is stunning. All in all, it’s an odd and haunting chamber piece that invites closer study.