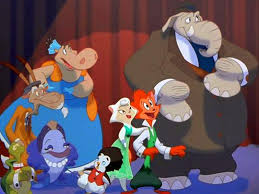 Warner Bros. has a great history of animation, but by the time this film came out, Disney had a monopoly on the animated film industry; in America, I mean. As a result, Cats Don’t Dance, a film that has much more in common with those classic Looney Tunes shorts than it does with the massive hit movies Disney was rolling out, suffered at the box office and not many people have seen it. That’s a shame because it’s a quality picture; lots of ideas, talented voice cast, and a handful of nice songs written by Randy Newman. It follows Danny, a cat from small-town Indiana, who moves out to Hollywood during its golden age (1930s) to follow his dream of starring in movies. Once there, however, he finds that animals are only ever given menial roles (no doubt inspired by the black experience in Hollywood), and that stars aren’t like the characters they portray on screen (there’s a fantastic Shirley Temple inspired villain named Darla Dimple). Sharp comedy and lively animation to go along with a good premise, even if they missed a chance at making a truly special satire.