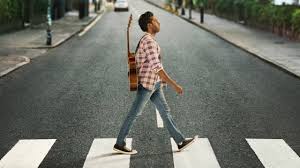 What if you were to wake up one day and find that The Beatles never existed? You can still remember all of their songs, the lyrics (just about), the artistry, but no one else can. It’s a fun thought. I’m not a musician, obviously, but I’ve actually contemplated something like this in more personal terms. What if Blade Runner never happened? Could I recreate it? Would it mean as much premiering more than thirty-five years after its reality? In any case, this is the premise of Oscar-winning director, Danny Boyle’s new project, Yesterday. Written by the master of light comedies, Richard Curtis (Four Weddings and a Funeral, Love, Actually, Bridget Jones’ Diary, Notting Hill), Yesterday stars Himesh Patel as a floundering musician, Jack Malik, living with his parents in the small English town of Lowestoft. He’s supported by his group of friends, chiefly, Ellie (James), a girl he’s known almost all his life, and his parents try, though naturally, they’d prefer he’d focus on a more sensible profession. He used to be a teacher and after another one of his musical performances is met with indifference, he decides to give it all up to return to teaching. Ellie does her best to convince him to stick with it. There’s not much of an explanation for why the premise kicks in (which I’m fine with, explanations are boring), besides a brief blackout that results in Jack getting hit while riding his bike home one evening. Waking up in the hospital, Jack slowly discovers that no one understands his Beatles’ references. This leads to a major revelation for Jack and, despite some guilt and apprehension, he rides the success of duplicating The Beatles’ work all the way to the top of the music world. Unfortunately, he loses Ellie on the way.

I’m torn on how important of a role knowledge of The Beatles plays in enjoyment of Yesterday. There are countless references, so certainly much of the humor is dependent on being in on the joke. I have only a vague knowledge of John, Paul, George, and Ringo, and I think I got the film okay. More important is how much you like the music. I like their music without loving it, and I would say at least 1/3 of this film is Beatles music; played and performed well to the credit of the filmmakers and Patel.

I was surprised at how the film glosses over most of the negative aspects of music stardom. There’s not much beyond light hints at the compromises artists sometimes make or the seamier aspects of being a rockstar. Jack doesn’t fall into drugs or sleeping with the hordes of predatory fans. Maybe that’s for the best. We’ve seen that story so many times before; really just last year, with another incarnation of A Star is Born. On the other hand, we get all of the Beatles music without experiencing any of the pain or struggle that goes into making great music. Jack is the same person at the end of this film as he is in the beginning. This is a fairy tale and that’s fine, but it’s awfully small for such a big concept. Consider the journey involved and the wisdom of a similarly high-concept comedy in Groundhog Day. That film took its concept to some really far out places, still managed to be funny, romantic, unpretentious, and seemingly light. It didn’t settle for pleasant which I feel Yesterday does. Bottom line though is there are worse things to be than pleasant, and Yesterday is a skillfully made romantic fantasy with terrific leads.