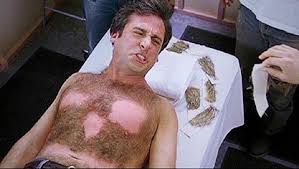 One evening, over a game of poker with his co-workers, affable but dorky Andy (Carell) spills his secret. He’s a virgin. Bemused and alarmed, his co-workers make it their mission to help the man. While weaving through their bad advice, Andy meets a woman he really likes named Trish (Keener), but fears getting intimate with her. Like all Apatow’s films, this one is overly long, often hilarious, raunchy, and ultimately sweet. Carell makes a likable hero even as we cringe at his awkwardness. Romany Malco is great as the “player” of the group. His well-intentioned, horrible guidance leads to the film’s best moments.