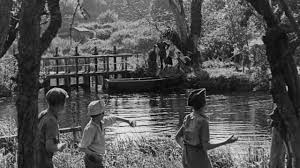 Three strangers-an american soldier, Bob Johnson (Sweet), a British soldier, Peter Gibbs (Price), and a young woman from London, Alison Smith (Sim)-meet upon arriving in a small English town called Chillingbourne during wartime. That night, Alison gets glue poured in her hair by a mysterious vandal, and, after learning that this sort of thing has happened to at least a dozen other girls, the three team up to root the culprit out. In the process, they grow enchanted with the little town and its enigmatic magistrate, Thomas Colpeper (Portman).

This is a strange film in that its plot is rather unimportant. Like the protagonists, I wrapped myself up in the would-be whodunnit premise on first viewing, and was disappointed to find it come to a fairly simple conclusion. Seeing it for a second time, I realized how beautiful it is from scene to scene. It’s a whimsical picture, rich in detail and colorful characters.