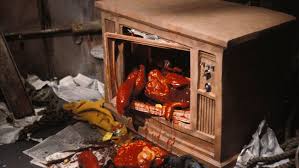 Max Renn (Woods) runs a sleazy television station that pushes sex and violence with its programming. Always on the lookout for new material, Renn stumbles upon Videodrome, a pirated show made under mysterious circumstances that takes gratuitous sex and violence to new heights. Renn becomes obsessed with the show but when he does a little digging, reality and Videodrome begin to blend together, and he finds that what he thought was staged might actually be genuine snuff films. Directed by David Cronenberg, master of body horror, this movie alternates between seeming to have a lot of plot to digest and the plot apparently not mattering at all, and yet, I was never frustrated. From wonder to disgust, it’s best to watch and move with Videodrome as it goes from one striking image to the next. What’s it saying though? Is Renn corrupted by what he’s watching? Desensitized by sex and violence on television to the point where he has to look for stronger material to feel anything? I don’t have an answer but I’m certain I’ll watch this film again and again searching.