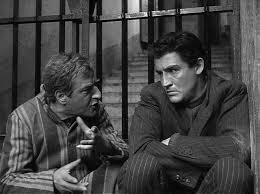 Heists are usually deadly serious affairs. There is something timelessly compelling about a group of people coming together to pull off a grand scheme, planned and executed to perfection. Italian comedy Big Deal on Madonna Street shows that watching a plan go to pieces can also be a lot of fun. An ensemble full of Italy’s most popular actors play a gang full of petty thieves, led by Peppe (Gassman), who plot what would seem a pretty low-stakes jewelry store robbery. Unfortunately, despite having the earnestness and resources to pull it off, none of them really know what they’re doing and the film flows from one hilarious hiccup to another. Adding to the fun are two subplots involving the exceptionally beautiful Claudia Cardinale and Carla Gravina as love interests for two members of the inept gang.