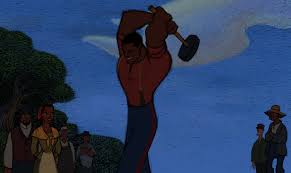 Beautifully animated telling of the famous John Henry folktale wherein the newly freed black man attempts to build a better future for his wife and family out west. There, on the verge of their dream, Henry and many other black families face opposition leading to the folklore hero’s legendary battle with a steam-powered hammer. Man versus machine. The story is told in colorful, hand-drawn (with the pencil shadings left in) fashion mixed with excellent music from Sounds of Blackness. This is a wonderful adaptation of the myth and would be a perfect introduction to John Henry for any kid. It also represents, unfortunately, the earliest portrayal of black people in a Disney animated film as far as I can tell.