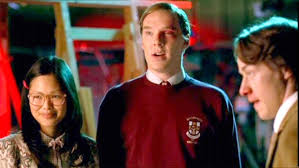 Coming of age, youthful romance, academic contests, these are a boundless source of storytelling. Set in the 1980s, Starter for 10 stars James McAvoy as Brian Jackson, an intelligent but meek freshman student at Bristol University who joins their “University Challenge” team, a trivia competition between schools, popular on television. Brian falls for his worldly teammate, Alice (Alice Eve), and befriends the politically passionate, Rebecca (Rebecca Hall), as he navigates his first year away from home. This is a very engaging, well-acted film. My only reservations were that the endearing but awkward Brian makes so many wrong decisions and has so many uncomfortable moments that I struggle to watch the film straight, instead, taking a number of lengthy breaks to get through the narrative.