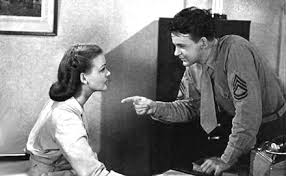 It’s one of my favorite things in life when I stumble upon an old film that I’ve never even heard of and it turns out to be a gem. It’s the equivalent of a great hole-in-the-wall restaurant. Strangers in the Night, directed by Anthony Mann early in his career, stands at just 56 minutes long with no recognizable stars, though I’ve seen the lead actress in a pretty unremarkable whodunnit earlier this year. A marine, Johnny Meadows (William Terry) corresponds with a woman he’s never met named Rosemary Blake during his time in the South Pacific for World War II. Upon returning home, he sets out to meet this girl he’s never seen but has fallen in love with through their letters. Instead, he meets Mrs. Hilda Blake (Helene Thimig), a strange and sinister older woman who claims to be Rosemary’s mother. He also meets a beautiful doctor, Leslie Ross (Virginia Grey), complicating his feelings for Rosemary. It’s a rare film that keeps me clueless about where it’s heading, but Strangers in the Night did just that. It’s a really tight, suspenseful story that offered many surprises.

2 thoughts on “Strangers in the Night (1944, Directed by Anthony Mann) English 7”