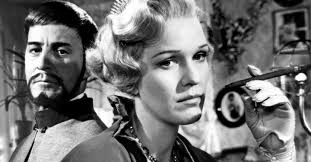 No great fan of Ingmar Bergman’s, I often relish saying so to other film fans and steeling myself to their protestations. He has his moments though and Smiles of a Summer Night is one of his most entertaining, centered around an insular group of Swedish nobles around the early 1900s that prove to be most dysfunctional. They all love someone else other than the one they’re with. Fredrik Egerman (Gunnar Björnstrand) is married to a sweet but much-too-young-for-him girl named Anne (Ulla Jacobsson) who, in turn, quietly admires her stepson, Henrik (Björn Bjelfvenstam), and Henrik loves her but wrestles with his faith and his lust for playful maidservant, Petra (Harriet Andersson). This all may sound heavy but a few more players are introduced and Smiles of a Summer Night becomes a wonderful, charming romantic farce with happy endings all around. Filmed in beautiful, shimmering black and white.