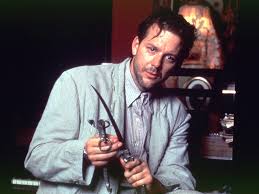 There are two movie formulas that always leave me satisfied. One belongs to the western genre: a town bullied by outlaws finds help from a vigilante outsider. The second is the private eye subgenre: a world-weary gumshoe accepts a seemingly innocuous case that develops into the biggest case of his career. I love mystery and femme fatales and tough-talking men and all that comes with this latter plot. Angel Heart, starring Mickey Rourke and Robert De Niro, is such a film. Beginning in 1950s New York, Rourke plays Harry Angel, hired by De Niro’s Louis Cyphre to track down a lost jazz singer named Johnny Favorite. His investigation leads him to New Orleans and a cast of characters involved in the dark arts including the beautiful Evangeline Proudfoot (Bonet). As the plot thickens, Angel Heart morphs from a private eye drama to a supernatural thriller, and the ending, absurd and abstract as it is, floored me. Mickey Rourke is a special actor; inherently interesting, exciting, with great emotional range. His revelation scene opposite a terrifically understated De Niro is a tour de force.

One thought on “Angel Heart (1987, Directed by Alan Parker) English 8”