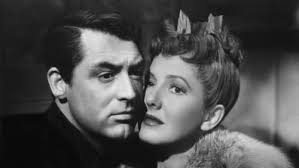 There are films left on the great Cary Grant’s filmography for me to see, but The Talk of the Town is likely the one and only film that I’ll find myself rooting for someone else to end up with the girl. Grant plays Leopold Dilg, a fugitive wrongly accused of arson and murder, holed up in the home of an old friend, Nora Shelley (Arthur). With the whole town looking for him, things become more difficult still when the austere Professor Lightcap (Coleman) appears early to rent a room in the house. A love triangle develops out of this situation, and though the potential is there for comedy, The Talk of the Town is played mostly straight with its trio of stars giving fantastic performances. Not as emotionally resonant as some of Capra’s similarly dramatic-comedies, this film is mostly a testament to classic Hollywood star power.