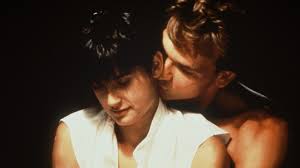 So many supernatural romances have come and gone. Films as sappy and sentimental as Ghost usually, at best, make sufficient money at the box office before fading off to cable television. Ghost is one of the most unlikely mega-hits that I’m aware of. Starring Patrick Swayze and Demi Moore as the main couple, Sam and Molly, the two are separated by the apparent mugging-gone-wrong that leads to Sam’s death. Now a ghost, Sam can only communicate to Molly with the help of scam artist, Oda Mae Brown (Goldberg). There’s nothing actually new about this movie. It’s old-school melodrama and romance mixed in with a handful of dated special effects. Why does the film endure? That spark of magic that sometimes strikes where aspects of a film really work happens here. Swayze and Moore are a great onscreen couple. Whoopi Goldberg’s Oda Mae Brown is a fantastic scene-stealer, and who can forget the pottery scene?