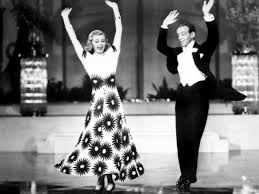 Fred Astaire looks like a cartoon caricature. The ones artists draw of you at fairs or on bustling piers. His unique appearance, creativity, and gentleman persona make him one of the most charming stars of classic Hollywood. His partnership with the beautiful and prodigiously talented Ginger Rogers is iconic and lasted over the course of ten films, of which, I would say Shall We Dance is probably the second best; Top Hat being tops. Shall We Dance follows the formula laid out by their previous collaborations. Gershwin music, great dance numbers, romance, light comedy, and misunderstandings. Astaire plays Peter P. Peters, or the great “Petrov,” an American ballet dancer posing as a Russian. He’s instantly smitten with tap dancer, Linda Keene (Rogers), and wants to team up. She’s not so sure about him, but tabloids mistakenly believe the two to be married and spread the false rumor, forcing Linda and Peter to masquerade as husband and wife or face scandal. Wonderful entertainment and timeless songs like “Let’s Call the Whole Thing Off” and “They Can’t Take That Away From Me.”

One thought on “Shall We Dance (1937, Directed by Mark Sandrich) English 8”