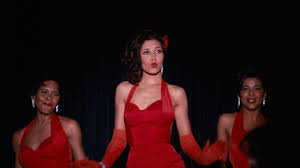 Before directing such classic stinkers like Batman and Robin and guilty pleasures like 8mm, Joel Schumacher wrote Sparkle, a low-rent version of A Star is Born if I were inclined to be harsh. The truth is though that I like this film. Starring Irene Cara as the titular protagonist, a young girl in 1950’s Harlem who joins her older sisters in a soul-singing trio but who soon breaks out as the star. Directed by Sam O’Steen, famed editor who never returned to the director’s chair after this film, Sparkle has a curious lack of emotions for a melodrama. It also feels rushed at times. The positive side to that though is that because it lacks common cinematic qualities, I think Sparkle seems authentic and offers an interesting glimpse at ghetto life in the 1950s. The acting is solid if slightly stilted early on, but the soundtrack is the real star. Curtis Mayfield, unsurprisingly, does terrific work. “Giving Him Something that He Can Feel” is a classic to this day.