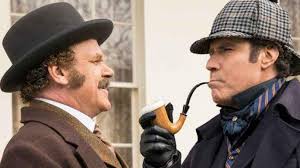 Roger Ebert had a theory about comedies only working if the characters weren’t in on the joke. Michael Scott in The Office, for example, has no idea how ridiculous he is. This theory explains in part why Holmes and Watson, yet another take on Arthur Conan Doyle’s creation, doesn’t work. The actors, including stars Will Ferell and John C. Reilly (hilarious together in Talledega Nights and Step-Brothers), are too aware of their punchlines. There’s a lot of mugging and hammering home each obvious line. The plot offers little to amend for the lack of wit as Holmes and Watson set out to catch a mysterious threat to the Queen posing as Moriarty. Not the worst movie ever made, but probably the worst Sherlock film.