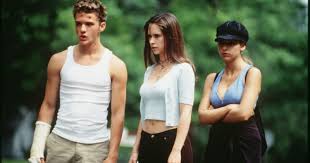 A hell of a title and an interesting premise can go a long way. Case in point: I Know What You Did Last Summer. Written by Kevin Williamson, a year removed from a huge success in Scream, this film follows a group of teenagers (Julie, Helen, Barry, and Ray) one night after graduating from high school. Under the influence of alcohol, they accidentally hit a stranger and rather than get the man help, they decide to hide his body at the bottom of the Atlantic Ocean. A year later, racked with guilt, the four find they’re being tormented by someone claiming to know what they did. Unlike Scream, this film is not scary or very clever, but it is largely entertaining, reasonably well-made and acted, and suspenseful. It’s an above-average slasher.