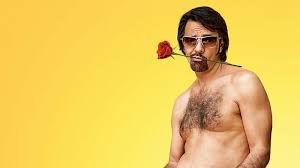 Determined never to work after seeing his father work his whole life and then die tragically, Maximo (Derbez) latches on to a wealthy heiress entering her golden years. Fast forward 25 years and Maximo is out on the street after his wife throws him over for a younger model. Looking to rebound with an even wealthier grandma (played by Raquel Welch), Maximo stays with his estranged sister (Hayek) and her 10-year-old son. Not well received by critics, I found Maximo’s exploits highly enjoyable and sporadically funny. Derbez is great fun as the pompous gold-digging male.