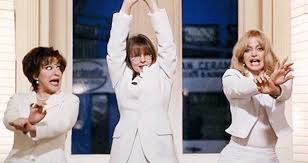 Three estranged friends from college reconnect after the death of the fourth member of their set, Cynthia (Channing). Reunited, the three-Brenda (Midler), Annie (Keaton), and Elise (Hawn)-find that they are all coping with sleazy ex-husbands who’ve left them for younger women, and the death of Cynthia motivates them to get even. The premise offers such a great opportunity for these terrific actresses and lends itself perfectly to satire. There’s some of that here. There are a few good scenes like Keaton learning that her husband is throwing her over for their therapist or the ending “You don’t own me” number. More often, however, First Wives’ Club seems unfocused. I didn’t understand their revenge plan for large portions of the film and it’s not because they’re like Ocean’s 11 or something. It’s because they didn’t have a plan.