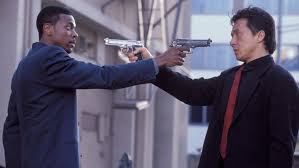 Formulaic isn’t, in itself, a negative. Most movie formulas are pretty good. If a film is following a formula, it’s because that formula worked before, and the challenge, then, is to make the familiar feel fresh. Rush Hour accomplishes this in stupendous fashion. It’s the fastest hands in the east meets the biggest mouth in the west, or so the poster’s tagline tells us. It’s a buddy cop film with Jackie Chan as the straight guy and Chris Tucker as the clown (though he’s not stupid). Chan plays Lee who comes to America to assist a longtime friend, Chinese Consul Han, in rescuing the latter’s daughter from a dangerous hostage situation. Tucker plays Detective Carter, LAPD’s black sheep, tasked with babysitting Lee and keeping him away from the case. Instead, the two team-up. Rush Hour is at the top of its under-appreciated class. Action comedies are meant to be pure entertainment and on this end, Rush Hour delivers. Chan and Tucker are fantastic together and the supporting cast is filled out with consummate character actors.