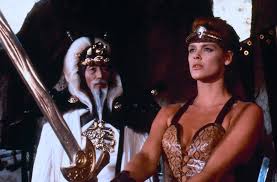 The great Schwarzenegger declared that Red Sonja is, “the worst film I have ever made.” Critics mostly agreed. I’ll concede some of their points. The acting is wooden. The dialogue reminds me of bad fanfiction, and yet, I would watch Red Sonja 100 times before sitting through Amour ever again. This tale follows the eponymous character (Nielsen) as she sets out on a quest to rid the world of the mystical Talisman and the evil tyrant, Queen Gedren (Bergman), who wields it. Along the way, she bands together with Lord Kalidor (Schwarzenegger), a mouthy child-prince named Tam (Reyes Jr.), and the Prince’s last faithful servant, Falkor (Smith). These actors weren’t chosen for their line-reading ability. They were chosen for their looks, and, on that end, Nielsen and Schwarzenegger are quite memorable. Nielsen with her flowing red hair and Schwarzenegger in his prime, impossibly buff form. This is a visual movie. Plenty of outlandish costumes and stunning colors. It’s also extremely entertaining.