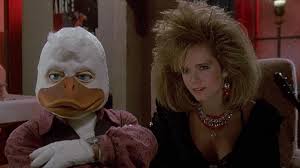 Beverly says it best, “Howard, you really are the worst.” I don’t know a thing about Marvel’s comic book series from which this movie was made, but as voiced by Chip Zien and portrayed in this film, Howard has to be one of the least charming heroes of all-time. Combining not-so-witty duck puns, general hostility, sarcasm, sleaziness, and bad animatronics, Howard’s pulled away from his planet and brought to Earth (Cleveland, to be specific) where he befriends Beverly (Thompson) and gets roped into stopping a violent alien form, the Dark Overlord (Jones), from taking over. This isn’t the worst film ever. It’s not even the worst Marvel adaptation. I’d vote one of the Fantastic Fours for that distinction. But I didn’t like anything about Howard the Duck. I have an affinity for the ’80s, its aesthetic and vibe, there being a number of bad films from that decade that I love, but Howard the Duck is an eyesore and painful to listen to.