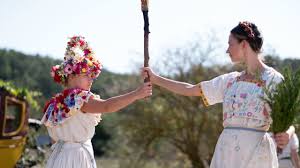 I’m not going to take sides-though it’s largely the male characters who suffer in this film, you could counter that it’s a consequence of their mistakes-but it’s established from the beginning of this two-and-a-half-hour descent that its protagonists, Dani Ardor (Pugh) and Christian Hughes (Reynor), are in a bad relationship, growing more and more toxic, and it’s from this relationship that the rest of the film spews. They’re a ticking time bomb; the kind of couple that ruins parties and makes everyone around them feel awkward. They made me feel awkward sitting in the theater eating Sour Patch Kids. We learn in the opening scene that Christian’s ready to break up with her. His friends, most forcibly Mark, a loudmouth played by Will Poulter, urge him to end things. They have a trip to idyllic Sweden approaching and Mark points out the potential barrage of foreign beauties waiting for them, Christian included if he can simply rip the band-aid off. Dani senses the truth. She has a troubled sister and leans on Christian too much. Instead of breaking up, however, Dani receives a phone call that leaves her shattered, Christian incapable of being honest with her, and the film, Midsommar, off to a gruesome start. And so, instead of a guy’s romp in Sweden for the Summer, Christian brings Dani along, as they visit Hårga, a commune, and home of Pelle, one member of their group. What follows makes Midsommar the wildest film I’ve seen in a long time, a great one and a first-rate horror flick.

Writer-director, Ari Aster, referred to Midsommar as a ” breakup movie dressed in the clothes of a folk horror film.” Many classic horror flicks build from realistic, fundamental fears. Rosemary’s Baby deals with anxiety about childbirth. The Exorcist features a mother helplessly watching her daughter go through an illness of sorts, but the immediate comparison or influence here is The Wicker Man. Not Nicholas Cage’s hilarious remake but the unforgettable original starring Christopher Lee. You can’t make a film about a sex cult and not be influenced by The Wicker Man. Midsommar even ends with a sinister image of a pyre burning as we process what’s led to this point, but Midsommar is otherwise a very different film. The more apt comparison for me is Roald Dahl’s Charlie and the Chocolate Factory. You have a group of outsiders-Christian, Dani, Josh (Harper), and Mark later joined by Brits, Simon and Connie-who are invited into a secluded, idyllic space and who are slowly excluded one by one after revealing their character. While the temptations in Willy Wonka’s factory were candy and chocolate, the commune in Midsommar seduces with flirtatious red-heads and ancient secrets. It’s emotionally scarred Dani who emerges, like Charlie, victorious in the end. What makes her so worthy? Like with Charlie, I’d say it’s humility. Christian and his group of college graduate students seem awfully entitled; entitled to privileged information, entitled to pissing on trees at random. It’s at the end when Dani wears the crown that Midsommar feels like a sordid fairy tale. To go from albatross around her boyfriend’s neck to become a queen is the stuff of fantasy and works in making Midsommar dreamlike but also touches seriously on how cults operate. They make her feel special, call her queen, and offer an escape from difficulties in reality.

There’s been much said about the look of Midsommar. From the moment the trailer dropped, we’ve known that Aster has fashioned a nightmare in the midst of broad daylight. More than that though, he’s made a film that’s gorgeous; a film that grows in visual splendor as its story becomes increasingly hellish. It’s clear that he’s an exciting new filmmaker with a grim eye for family drama and in his lead, Florence Pugh (previously unfamiliar to me), he’s found an actress of unique, innocent features to carry the weight of all the ugliness of Midsommar. She’s terrific.

If I were pressed to question logic, I would ask the protagonists what they are doing visiting a pagan cult and what did they expect? Unlike the characters in Scream, these guys haven’t seen enough horror flicks apparently, because Midsommar unfolds precisely how you’d expect it to aside from precise, disgusting detail (now I know what the blood eagle is, thank you Ari Aster). That I can know what’s going to happen and still be shocked and floored by how it happens is a sign of tremendous skill and talent by those who made this film.