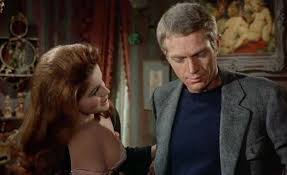 How much time does Steve McQueen shave off a film by making traditional character development unnecessary? Edward G. Robinson, as well? As soon as the two legendary actors walk across the screen, I’m invested. The entire cast is fantastic though (all the way down to Blondell and Cab Calloway in small supporting roles) in this story of a hotshot stud’s poker player, Eric (McQueen), out to prove he’s top dog against Lancey Howard (Robinson), who’s been top dog for decades. That aspect of the film may sound derivative of The Hustler but that’s where the comparison’s end for me. The Hustler is a bleak, powerful character drama. The Cincinnati Kid is star-driven, stylish, grand entertainment. Consider that I know nothing about poker and the film’s climax, an extended game between world-class players, became a foreign-language film to me. How remarkable is it then that this portion of the film was as exciting and tense as any I’ve seen in a long time. Its outcome, both unexpected and welcome.

One thought on “The Cincinnati Kid (1965, Directed by Norman Jewison) English 8”