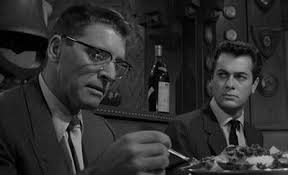 J.J Hunsecker (Lancaster) is a powerful newspaper columnist in New York City. For reasons hardly mentioned and best left to be inferred, he has his most persistent flunky and press agent, Sidney Falco (Curtis),  destroy his sister’s engagement to an up and coming Jazz musician. Sidney will do anything for some spotlight. I love the way the characters (mainly Sidney and Hunsecker) talk to each other. “You’re dead son. Get yourself buried.” Sidney’s mile a minute verbal style perfectly fits his grimy desperation and Hunsecker’s deadpan demonstrates a man who doesn’t have to yell. The performances are perfect. The dialogue is first-rate. James Wong Howe’s cinematography is brilliant. Stellar noir.