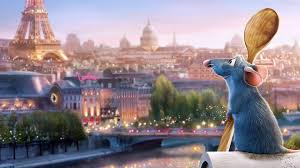 A rat living in the French country dreams of being a great Parisian chef. What a dumb idea, or else, that’s what I would have said if presented with this idea on paper. The resultant film, however, brought to life with some of Pixar’s finest animation, writing, and voice acting, is a triumph. Remy (Oswalt), the rat with grand ideas, gets his chance in a Parisian kitchen but needs the help of a garbage boy,  Linguini (Romano), to act as a sort of puppet for the operation, seeing as rats aren’t well-received in kitchens. The first step in making this odd story work is the design of Remy and all the rats. Nobody hates rats more than me, but Pixar successfully makes them cute. Secondly, they establish Remy as hygienic. It seems silly but it’s an important part of helping accept him as a chef.  After that, disbelief suspended, Ratatouille is one of the most enjoyable films, animated or otherwise, of the past 15 years.