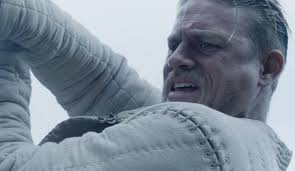 Vortigern (Law) usurps his brother, Uther, for the throne of Camelot, but Uther’s young son, Arthur, escapes, destined to one day return and claim his birthright. As an adult, Arthur (now played by Hunnam) joins the resistance after pulling the powerful sword, Excalibur, from the stone. This dingy rehash of the oft-told tale had me bored from the jump. It’s not that Guy Ritchie’s film is unoriginal. Though I’ve seen many of his tricks before in better movies (funky soundtrack, disorienting editing, slow-mo), I will say that I’ve never seen a King Arthur story told like this before. It fails, however, to create any compelling characters. I’ve yet to see Charlie Hunnam emote on screen, and continue to be skeptical of his leading man ability. The side characters are forgettable. Jude Law’s villain is the most interesting character in the film, and even he feels like a miscalculation (too much emotion with no obvious motivation except I guess he’s power hungry). The action and moments of spectacle also fail to connect. Overall, a harmless but definite misfire from a director I like.

2 thoughts on “King Arthur: Legend of the Sword (2017, Directed by Guy Ritchie) English 4”