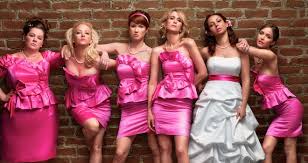 Annie Walker (Wiig) seems to have hit rock bottom in every aspect of her life. At the same time, her lifelong friend, Lillian (Rudolph) is getting married and needs Annie to be the Maid of Honor. Annie’s happy to do it but begins to feel insecure when she meets Helen (Byrne), Lillian’s new beautiful, fabulously wealthy friend who’s pushing her way into Annie’s place. Bridesmaids really took off when it came out, making a killing at the box-office, receiving acclaim from critics, and even a handful of award nominations. While following a typical romantic-comedy formula, it deftly blends in elements of buddy comedy as well as women behaving badly (à la I Love Lucy). Add to this, Bridesmaids was an introduction for many, including me, to Melissa McCarthy, Rose Byrne, and Kristen Wiig. It’s funny and likable enough for repeat viewings.