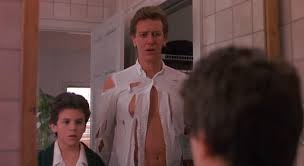 Negligent, workaholic father, Marshall Seymour (Reinhold) and bullied 11-year-old son, Charlie (Savage), swap places through some Tibetan treasure that they stumble upon with mystical powers. Now the tough businessman has to survive in middle school while the kid has to make decisions in corporate America. You’re likely familiar with this premise in one form or another. The Freaky Friday remake is the probably the best of the dozen or so body swap comedies. Vice Versa is decent. It’s not particularly funny or thrilling but it is a painless watch. The main draw for this premise is that the actors have to convincingly portray their counterparts for the majority of the film. I think Savage pulls off his job of seeming like a slightly pushy adult. Reinhold isn’t given much that’s funny on paper and so, especially late in the movie, he overacts a bit.