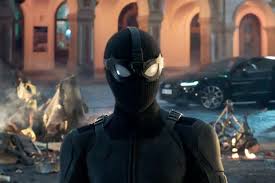 Long gone is the epic, operatic world of Tobey Maguire’s Spiderman. Tom Holland’s Spiderman is breezy, lightweight entertainment. There’s nothing wrong with that. Holland is an excellent Peter Parker and Spiderman: Far From Home is enjoyable. This time around, following the events of Avengers: End Game, Peter and the rest of the people who were wiped out by Thanos have returned, calling that five-year absence “the blip.” Slowly returning to normal, Peter, along with his classmates, prepare for a class trip over the summer to Europe, where Peter hopes to unwind and tell M.J (Zendaya) how he feels about her. Once overseas, however, Nick Fury arrives, revealing that the class trip was a ruse to get Peter to Europe to help fight a group of monsters known as Elementals, alongside Mysterio (Gyllenhaal), a hero from a different Earth. Spiderman: Far From Home is entertaining. The change of scenery keeps things fresh. Peter and M.J’s moments are nice. The villain is compelling enough. I’ve never liked the idea of Spiderman being the bottom option for saving the world. The film has to jump through hoops to prove that it has to be Spiderman that saves Europe. Where are the other Avengers? All of them are occupied? It doesn’t make a lot of sense to me.

One thought on “Spiderman: Far From Home (2019, Directed by Jon Watts) English 6”