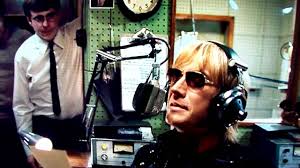 Like a wayward ship out to sea, The Boat that Rocked (alternately titled Pirate Radio, which I prefer) doesn’t seem to have in mind any destination. It’s the 1960s. Rock and Roll music is arguably at its zenith and still very much taboo among polite society people in England. Several pirate radio stations fill international waters, broadcasting the popular music of the day. A teenager, Carl (Sturridge), is set to live for a time aboard one such ship, meeting the large, unstable cast of characters that make up “Radio Rock” including “The Count (Hoffman),” “Simple Simon (O’Dowd),” and Gavin Kavanaugh (Ifans) among others. Meanwhile, humorless Sir Alistair Dormandy (Branagh), a government minister, vows to shut down Rock and Roll once and for all. This film takes its time. For a comedy, that’s not necessarily a good thing. On the one hand, the music’s great and the characters are often fun, but this film still felt at least 20 minutes too long. There are also some problematic scenarios like Doctor Dave (Frost) and Carl planning to trade places during sex with a groupie. Nothing comes of it, so it’s not enough to sink the film but it will still elicit some grumbling.