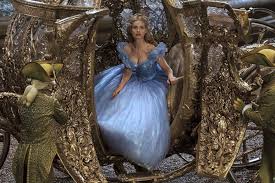 Orphaned through hard-luck and raised by her cruel, unloving step-mother (Blanchett), kind Cinderella (James) cooks and cleans all day long in the house in which she once lived a charmed life, but fate hasn’t completely turned on her as a chance encounter gives her an opportunity with the handsome prince (Madden) who falls instantly in love with her.  A fairly faithful live-action remake of one of Disney’s greatest successes proves to be solid, welcome entertainment even if it is, like all of these remakes, unnecessary. Director, Kenneth Branagh, is, among other things, a great confectioner as a filmmaker. All of his films boast an abundance of style and beauty and Cinderella is no exception. Cinderella is also exceptionally well-cast. I can’t imagine anyone better than Lily James and Cate Blanchett in those roles. It’s a wonderful story slightly less impactful since it’s been told before.