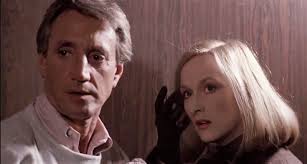 Dr. Sam Rice (Scheider), a psychiatrist, is involved in a murder investigation after one of his patients gets stabbed to death. The prime suspect? Brooke Reynolds (Streep), whom Sam becomes infatuated with despite the potential danger. Still of the Night is described as Hitchcockian which in this case just means it borrows elements from several of the suspense master’s films. The lead performances are both strong. It’s especially enjoyable to see Streep as a femme fatale, and the tone, look, and pace of the film are classic noir which I love. Where Still of the Night fails is in the plot. It’s too simple but also somehow not clear enough early on what we’re trying to solve. The cast has about 5 characters which mean 4 suspects since we can safely eliminate the lead from the list (although that could have been an interesting twist). It’s just not surprising enough. In other words, unsatisfying.