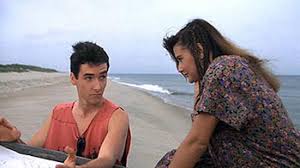 After the incredibly entertaining Better Off Dead (1985), John Cusack and director Savage Steve Holland reteam for this equally silly, only slightly less fun comedy, One Crazy Summer. Cusack plays high school graduate, Hoops McCann. Over the summer, with his group of weirdo friends, he takes on the local bullies and tries to win the sweet, local beauty, Cassandra (Moore). There’s a lot going on in this film and very little of it is important. There’s no threat of taking anything that happens seriously, but I enjoyed its ridiculous, joke-a-minute sense of humor. Cusack is an excellent underdog in romantic comedies and Demi Moore is the worthy object of his affection.