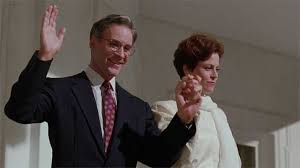 Kind, ordinary Dave Kovic (Kline) works getting jobs for the less fortunate and occasionally pretends to be the president, Bill Mitchell, who bears a striking resemblance. When Mitchell has a stroke leaving him comatose, sinister Chief of Staff, Bob Alexander (Langella), dupes Dave into taking on the role of imposter full-time, allowing himself to continue the role of puppetmaster in the oval office. Clever update on the Prisoner of Zenda with a fantastic lead performance from Kline and an appealing romance between him and Sigourney Weaver as the First Lady, Ellen Mitchell. Dave is light entertainment, bereft of anything really substantial, despite its political setting, but it’s always enjoyable to watch.