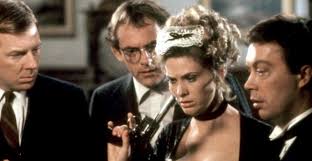 Based on the classic Hasbro game, Clue sees six strangers-Mr. Plum (Lloyd), Mrs. Peacock (Brennan), Mrs. White (Khan), Ms. Scarlet (Warren), General Mustard (Mull), and Mr. Green (McKean)-invited to a secluded mansion one rainy night to meet a man, Mr. Body, who is blackmailing all of them. He winds up murdered, as do the unfortunate servants, except for Wadsworth (Curry), the clever butler who works to unravel the mystery of whodunnit. The fantastic cast do well with the fast-paced, irreverent script and the whole thing has a free-wheeling, made up as it goes feeling that makes the movie a blast. Curry’s over-the-top, hamming prove to work perfectly with the part.