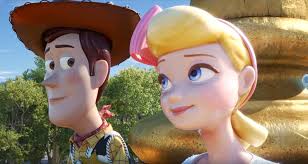 Is it possible to see a fantastic movie and still feel let down? The answer is yes because with their Toy Story films, Pixar has crafted a multigenerational, timeless, poignant series that can seem personal to a countless number of people. Toy Story is personal to me. The first one is the earliest film I remember seeing in theaters. The second, I recall, playing hooky from school to see it with my family, and the third aligned perfectly with my own graduation from high school and my summer preparing to leave for college (as Andy does in the movie). More importantly, though, the first three Toy Storys are great. Toy Story 4 is not.

The story opens looping back to when Woody (Hanks) and the gang belonged to Andy. RC, one of the toys we learned from Toy Story 3 had moved on to another home and a new child, is stuck in some mud and Woody launches a rescue mission. A suspenseful but familiar scene ensues, then shifts dramatically and emotionally to reveal what became of Bo Peep (Potts). If you recall, like RC, Bo Peep is missing from Toy Story 3. Here, we see, she’s taken to a new home but before she’s packed into her new owner’s car, she asks Woody at her side to come with her. Faced with a painful decision, he chooses loyalty to his kid, Andy. This is a tremendous opening scene. These movies deal with heavy, human themes which is what makes them so endearing-insecurity, loyalty, the passing of time most notably-and now, in Toy Story 4, life choices and regret. Also, from the opening frames, Toy Story 4 shows off absolutely stunning animation. Pixar demonstrated in their short film, The Blue Umbrella what photorealistic animation could look like and they transfer it here beautifully. Look at the grass and the rain in the background.

After the opening scene, Toy Story 4 dips a bit. Woody’s not being played with. He’s dealing with the reality that he’s not Andy’s toy anymore and he’s not Bonnie’s favorite. To fight back his feelings of lacking purpose, Woody devotes himself to protecting Forky (Hale), a spork-toy Bonnie makes in her school orientation that she’s in love with. Forky, having an identity crisis, just wants to go in the trash. When Bonnie and her family leave for a road trip bringing all her toys along with her, protecting Forky becomes an adventure.  Woody’s moments attempting to persuade Forky of his value to Bonnie are well-performed by the actors but a drag overall. It makes the first act seem interminable. Eventually, another adventure for Woody does begin and a host of new characters are introduced. Key and Peele as Plush toys are my favorite new additions. Along the way, Woody meets back up with Bo Peep, who’s more adventurous and self-reliant than she showed in Toy Story 1 and 2. Her scenes with Woody are sweet and engaging and lead to an affecting ending, but here’s my issue. Bo Peep is not a great character in 1 or 2. She’s an afterthought. So what’s wrong with developing her for this new film? It feels forced. In 1 and 2, she’s completely meek and largely does nothing while the action happens all around her.  She stands in a corner while her beau, Woody, is thrown from a moving van by Mr. Potato Head and the others. Now, all of a sudden, she’s Indiana Jones. Movies, for whatever reason, aren’t like TV where you can rewrite characters and we’ll pretend like we don’t remember previous seasons. I think they broke with the integrity of certain characters to tell this story or perhaps to appease parties unknown.

Here’s a deeper issue: notice how I haven’t mentioned Buzz yet? He’s the afterthought in this one. Sure, Woody is the main character. That’s fine, but they have always shared the posters. Buzz and Woody’s friendship is one of the best in film history.  Toy Story 4 gives the iconic Buzz Lightyear very little to do and it dilutes what should be a more impactful final scene. As for the rest of the Toy Story gang, they are basically M.I.A; Jessie, Bullseye, Mr. Potato Head, Hamm, Rex, etc. They are nearly out of the entire picture. That’s so disappointing.

Finally, Toy Story 4 suffers slightly from not having a compelling villain. Gabby Gabby (Hendricks) pushes the plot forward, but she offers nothing new. She’s an abandoned toy that just wants to be played with. Remind you of Stinky Pete and Lotso? Me too.

If it seems like I’ve done a lot of complaining about a film I’m giving a positive score, remember that the first three are all 10s in my book. Trilogies have been the standard for great franchises for decades. If done properly, it’s the most satisfying summation of a story and you don’t want to run on too long. Consider where the last Toy Story left off. Andy, nearing adulthood says goodbye to all these toys (these wonderful characters), and it is the end of an era and the end of a beloved franchise (or so I thought). Here is Toy Story 4. Fortunately, this isn’t a case of overstaying its welcome and it’s not awkward like when you say goodbye but then see that person again a moment later. Toy Story 4 is like an aging athlete who has a perfect swan song of a season but decides to play for one more. Why? Toy Story 3 ends perfectly. Toy Story 4 ends well. And please let this be the end. Don’t milk Toy Story like its Ice Age.