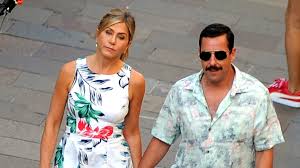 Nick and Audrey Spitz (Sandler and Aniston) have been married for a long time; 15 years. Sensing some frustration from his wife on their anniversary, Nick decides to finally fulfill his promise to take her to Europe where they have their long-awaited honeymoon. It gets derailed, however, by a mysterious aristocrat, Charles (Evans), who invites them to a yacht party hosted by his uncle, Malcolm Quince (Stamp), a billionaire with a petty streak. Quince ends up murdered and everyone aboard the yacht is a suspect, but the police zero in on the Spitzs. They have to solve the mystery themselves and for Nick who’s a cop trying to make detective and Audrey, an avid murder mystery reader, this turn of events proves more fun than their original plans. It’s a welcome concept. I, too, am an avid murder mystery reader and it’s difficult to make a whodunnit film that’s not entertaining. Sandler and Aniston work well together and the movie moves quickly and delivers on the standards of the style. Also, much of the typical Sandler silliness is removed from this one, instead, playing the plot straight and asking its leads to supply the laughs with banter. The result, though, is a film that’s awfully dry and a murder mystery that’s unsatisfying. It’s a likable hour and a half but with no real laughs or surprises, it’s hardly worth a second look.