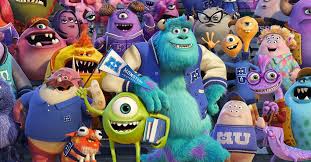 James P. Sullivan, or “Sully (Goodman),” and Mike Wazowski (Crystal), two beloved characters from Monsters Inc., return, only instead of a sequel which many hoped for with the potential to see a grown-up “Boo,” their return to film is a prequel. Set in their formative college years, the two meet as Freshman, immediately hostile towards one another. Sully is a bit of a jerk, cocky and over-reliant on the weight his family name carries. Mike is perhaps too serious. In any case, they attempt to make it into Monsters University’s top scare program but are unfairly failed by the school’s tough dean, Hardscrabble (Mirren). Mike makes a wager with Hardscrabble that gives him and Sully a second chance, but they’ll have to win the brutally competitive “scare games” with a team full of have-nots. Though glossy and generic, the film’s college campus and school antics are fun and the premise makes for solid light entertainment, but Monsters Inc was something more. It had substance and it was surprising. Monsters University suffers from common prequel problems in that because we know how things end up, it takes much of the suspense away in getting there.