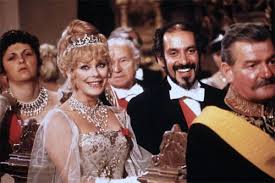 A foreign commoner, Rassendyll, travels to the fictional Kingdom of Ruritania to do some fishing and discovers that he’s the spitting image of their prince, Rudolph V, soon to be crowned and named king. A sinister plot by Rudolph’s half-brother, Michael, leaves the would-be king comatose and imprisoned which would allow Michael to take the crown, but Rudolph’s loyal guards convince Rassendyll to step in and assume the king’s identity until they can save him and place the rightful man on the throne. While portraying Rudolph, Rassendyl meets Princess Flavia, the king’s intended, and the two fall in love. It’s an exceptional premise and a wonderful novel made into a great film back in 1937, starring Ronald Coleman, Madeleine Carroll, Douglas Fairbanks Jr., David Niven, C. Aubrey Smith, Raymond Massey, and Mary Astor. There were apparently a few adaptations that came before and there have been several since, but this remains for me the essential version. That being said, I think the premise is ripe with opportunities to go in any number of directions. 1993’s Dave reimagined the story in a modern, American setting with Kevin Kline as an average Joe assuming the president’s identity.

This 1979 version, the one I most recently viewed, is billed as a comic adaptation starring Peter Sellers in three disparate roles. On paper, this is a promising idea. Sellers plays both the king-to-be, Rudolph V, and the commoner, renamed Sydney Frewin, and reimagined as an illegitimate bastard brother who works as a Hansom cab driver. Sellers plays Rudolph as a sniveling brat with a lisp and Sydney as a simple but honorable Cockney Brit who’s basically the straight man to a lot of the surrounding foolishness. Most of film’s ensuing plot is the same as what we’ve seen before. This Prisoner of Zenda’s problem, though, is one of tone. It’s played too straight for a majority of the time to warrant the occasional buffoonish interludes that crop up every once in a while. If they were going for zany, it needed to be zany from start to finish. The obvious comparison is Sellers’ own classics, The Pink Panther series. The formula for those films is basically inverted for Prisoner of Zenda. In Pink Panther, Inspector Clouseau (Sellers) was a buffoon and generally, everything surrounding him is played straight, while in Prisoner of Zenda, Sellers gives a solid, serious performance while silly, distracting subplots weave in and out of the background. Or maybe the film just needed to be funnier. None of the gags work, and too many of them use crudely done special effects. What does work is Henry Mancini’s score, and Anthony Hope’s story shines through just enough to make this Prisoner of Zenda watchable.