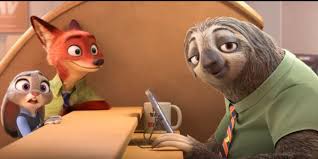 The Story goes that when John Lasseter (one of the great pioneers of computer animation and Chief Creative Officer of Walt Disney Animation Studios at the time) was presented with the idea of Zootopia, he responded by hugging the man behind its conception. That man, writer/director Byron Howard imagined a city of anthropomorphic animals that looked as if it were designed by animals. The city has different areas and neighborhoods that reflect the different climates animals are able to inhabit. And in this city, he populates his creation with animals that reflect human characteristics. This is, of course, a perfect setup for an adorable animal adventure movie, had Howard and his team at Disney decided to settle, and indeed there is plenty of cuteness present within the film, but this film does something unique with the classic animation trope of anthropomorphic animals in that the animals reflect some of the darker sides of human nature; not just the cute or the charming. There is a timely and provocative theme of prejudice coursing through the narrative of an adorable country bunny (voiced by Ginnifer Goodwin) moving to the big city to fulfill her dreams of being a top cop. She meets the slick and jaded street hustling fox, Nick (voiced by Jason Bateman), and sees firsthand how prejudice can shape a person’s life as much as anything. She’s even forced to confront her own prejudices that she didn’t even know were there. But this is a Disney movie and a great one at that, so the bunny and the fox find on their way to stopping a city-wide conspiracy that you can overcome other people’s prejudices by never buying in and believing in yourself.