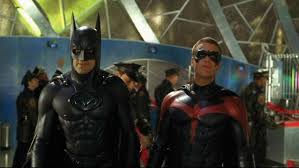 1998’s Batman and Robin is, simply put, a joke. They notoriously gave Bruce Wayne’s suit nipples, they chose for their lead villain, Mr. Freeze, played by a blue painted Arnold Schwarzenegger, spouting one bad ice-related pun after another (“let’s kick some ice”), and made Poison Ivy look like Divine from a John Waters movie (google it). I’d like to catalog for you, the film’s many shortcomings and harebrained moments, though it’s a Herculean task to try and catch all of them, but it’s also important to note and preface this with the truth, which is that I love this film. Definitely falls within the “so bad, it’s good” variety. I think it’s hilarious. I laughed out loud on more occasions during the length of this superhero flick than, let’s say, 95% of the straight-up comedies I’ve seen.

Technically the fourth entry in the pre-Christopher Nolan series of Batman films, it’s amazing how silly all of the Batman movies before Bale and Nolan seem now that I’ve seen their grittier, more realistic take on the material. Batman and Robin stars George Clooney as the billionaire playboy slash caped crusader. It’s incredible, and not enough is said about how Clooney was able to have a career after this film, let alone the Oscar-winning, lifetime achievement award receiving career he has had. Bat nipples should have been career ending. I will say that among the cast, who should all feel embarrassed, Clooney comes off the least foolish. He gives the role some gravitas, granted, masked behind layers of inanity, bad dialogue, and bat nipples (I’m going to keep coming back to bat nipples; they color the entire film). I would even go as far as saying that Clooney could make a great Bruce Wayne in a much better, more competent picture. Now, if you think I’m being over dramatic about bat nipples being potentially career-ending, take a look at the rest of the cast of then-stars. Chris O’Donnell returns as  Batman’s close ally, Robin. O’Donnell, who’d given a very strong performance six years earlier in Scent of a Woman (1992) with Al Pacino, never recovered from this dud. Neither did Alicia Silverstone, at the time of the film’s release, still riding the waves off of her early success in Clueless (1995). Here, she plays Barbara Wilson, grand-niece of Bruce Wayne’s butler, Alfred. She appears to be a nice, wholesome girl, but is later revealed to be a hardcore, action adventure heroine, and dons the ready-made Batgirl suit Alfred leaves her. Together, Batman (having trouble trusting his young sidekicks), Batgirl, and Robin take on Mr. Freeze, Poison Ivy, and Bane (3 on 3) who team up, rather improbably, to take over the world (or at least Gotham) with a telescope Mr. Freeze turned into a freeze gun. The villains are where the film really reveals its suckage. I’m going to address them one by one.

I’ve already referenced Schwarzenegger’s Mr. Freeze, and you probably got the point, but not enough can be said about his puns:

Mr. Freeze: Mercy? I’m afraid my condition has left me cold to your pleas of mercy.

See too, a scene where he sings along to the snow miser song from A Year Without Santa Claus (1974), while his henchman, who dress in fur coats and talk like they’re from the Bronx, provide backing vocals. Where does he get these guys? Honestly? He goes to New York and posts hiring notices? It’s insane. And they help him, why? Then again, Ted Bundy had followers. Perhaps, it’s one of those things that defy explanation. Like when Mr. Freeze zaps Robin with his freeze gun, and Robin’s cemented in a block of ice. The solution: Batman picks Robin up and puts him in hot water, and Robin’s perfectly fine. Science! What’s the point of Mr. Freeze’s gun if it doesn’t even kill anybody? It looks cool on an action figure?

Poison Ivy, as portrayed by Uma Thurman, is, against all odds, even worse. She escaped this travesty thanks to Tarantino casting her in his Kill Bill saga, otherwise, I’m certain this would have been career curtains. Let’s start with her “origin story.” The origin stories in the old Batman movies were the worst/most hilarious parts. She’s working in some kind of lab, minding her own business one minute. She opens a door, and all of a sudden, she’s in some weird underground cult room, complete with evil experiments. That’s it. All she did was open a door. The mad scientist in this new room goes, “how did you get in here? Now, I’ll have to kill you. You know too much.” What do you mean, “how did you get in here?” You didn’t even lock the door. His attempt to kill her somehow imbues her with the power to manipulate plants and toxins, and the sexy ability to kill men with a kiss. Almost lost amid Mr. Freeze’s bad puns are Poison Ivy’s equally lame lines: “They replaced my blood with aloe.” “Animal protectors of the status quo.” Worst of all: “My garden needs tending.” Smh. Uma’s performance is bad too. The dialogue is horrible and does her no favors, but her delivery only compounds the terribleness. She talks like a bad theater actress. And then there’s the striptease she does while wearing a gorilla costume. Has to be seen, to be believed. Yes, someone thought that was a good idea.

Bane, while equaling his compadres in stupidity, has far less screentime, thus leaves far less of an impression. Still, in his rare moments to shine, the filmmakers turn him into a Frankenstein figure; like a campy Frankenstein figure. He starts off as a scrawny child molester or something and is then given serum that makes him jacked. How to defeat him? Robin simply pulls the rather large tube from the back of Bane’s head and he disintegrates. So, so bad.

There isn’t much logic to Batman and Robin. Instead, there are pointless cameos from Elle MacPherson and Coolio. I’m sure the filmmakers were convinced their target audience wouldn’t notice (their target audience being 8 year-olds), and they were right. There was a solid 3 year period when I legitimately thought it was the greatest film ever made. Now, I see clearly. It’s in my exclusive top ten worst movies ever made list. So many poor choices, lapses of logic, head shaking moments, and bat nipples. Never forget bat nipples.