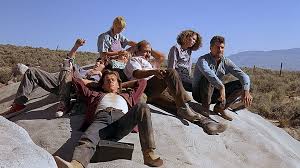 In the dusty old town of Perfection, Nevada, two handymen, Val (Bacon) and Earl (Ward), vow to move on from the familiar and chase their fortunes elsewhere. Just as they set out to leave, a couple of strange deaths pull them back as they and the rest of the town’s citizens work out the cause: three giant worms with teeth. Unable to escape or call for help, they ‘ll have to fight the monsters themselves or die trying. Tremors is a surprisingly well-written movie with a bevy of strong characters. Bacon and Ward make the lead characters’ camaraderie and chemistry feel natural, and the monsters are still effective almost thirty years after the film’s release. My one problem with Tremors is the setting, which is simply unattractive. It works for the film’s story, but as for the aesthetics, it’s unappealing and grungy.