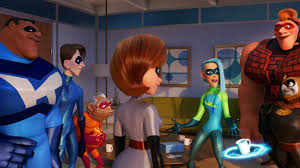 The Parr family, alias The Incredibles, are back. Fourteen years, four pretty undistinguished Pixar sequels later, and we finally get The Incredibles 2. There’s the father, Bob or Mr. Incredible(voiced by Nelson), with super strength, the mother, Helen or Elastigirl (voiced by Holly Hunter), who can stretch to insane lengths, oldest child, Violet (voiced by Sarah Vowell) who can turn invisible and create force fields, son, Dash (now voiced by Huck Milner), who has extraordinary speed, and the infant, Jack-Jack, whose powers were only hinted at in the first film. The good thing about animation is that all that lapsed time isn’t a problem. Writer and director Brad Bird can pick up right where he left off, unburdened by the effects of time on his actors, able to capably portray the Parr family just as we remember them from the first film.

So that’s what Bird does. The Incredibles 2 starts where the first film ends. Dash finished his race, Violet asked out a boy, and a new super villain, calling himself the Underminer, showed up to spring the heroic family back into action. This ending seemed like a perfect setup for another installment, but as The Incredibles 2 plays out, the Underminer proves to be only a small part of the whole. The important part of the scene is that The Underminer gets away, the Parr family cause a lot of damage protecting people, and the mandate outlawing superheroes sees the protagonists relocated once again, this time to a shabby motel where Bob contemplates returning to his soul-deadening insurance job. Fortunately, their good deed in fighting The Underminer was not completely in vain as it caught the eye of billionaire, Winston Deaver (voiced by Bob Odenkirk), who has very personal reasons for wanting to bring superheroes back. He believes the Parr family are the key. The only thing is, he thinks Elastigirl is the better choice as the face of his plan, throwing Bob for a loop. This go-around, Helen is out fighting crime while Bob stays home with the kids, dealing with Violet’s lovesick teen angst, Dash’s complicated homework, and Jack-Jack’s ever-growing list of abilities, while a larger plot begins to form slowly involving a masked figure known as The Screenslaver.

The over-arching plot, due to the supervillain of the piece, is good, not great. It’s the one thing holding the film back from being in line with its predecessor. The villain’s secret identity with all of the red herrings has been done before, to the point that we can see the film’s third act coming a mile away. This ends up not being a major detractor since Incredibles was always best as family commentary, genre satire, and situational comedy. All of this remains intact. Jack-Jack steals the show with one of the film’s chief pleasures being his expansive roster of powers slowly being revealed throughout the movie. I won’t spoil them here. The great scene-stealer from the first Incredibles, Edna Mode (voiced by Brad Bird himself) returns and has a wonderful scene with the infant Parr.

The action sequences in The Incredibles 2 are stunning. We’re reminded that the possibilities in animation are endless, and Brad Bird pushes the envelope with every new film. Stunning is how I’d describe the animation and design of the film as well. Even without living up to the ridiculous heights of the first movie, The Incredibles 2 is a fantastic superhero film.