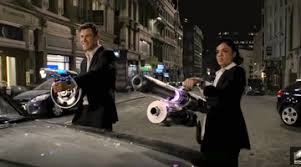 Rewatching the first Men in Black film, starring Will Smith and Tommy Lee Jones, I was struck by how odd it is. It is surely one of the weirdest mainstream blockbuster films ever. That’s a great deal of what made it so fresh back in 1998. An inspired, inventive blockbuster movie. There were several back in the 1990s, but they are very nearly extinct now. When’s the last time a fresh blockbuster picture came out? I can’t remember one this decade. The closest I can think of is The Hunger Games, which, though based on a book, at least isn’t a remake or a reboot or an MCU film. In any case, after the success of the first Men in Black, two sequels followed, each further prioritizing CGI and their big budget over story, humor, and unique ideas which are what made the original special. Now comes Men in Black International, a film nobody asked for and is probably going to sink at the box office. The good news is, despite or more likely because of my exceedingly low expectations, I enjoyed this movie. Pleasantly surprised, I found it light, fast-moving, and just intriguing enough to get by. The bad news is I doubt anyone cares. Critics seem to be lashing out from remake fatigue because Men in Black International currently sits at a lowly 28% on Rotten Tomatoes. My movie taste is admittedly questionable but this film at 28% is hyperbole. It has worse reviews at the moment than the incomprehensible Suicide Squad. That’s honestly absurd.

Tessa Thompson plays Molly, first introduced as a young girl having an encounter with an extraterrestrial. Men in Black swoop in to control the situation but miss Molly when they do their memory-erasing of the witnesses. From that day on, Molly is obsessed with aliens and the mysterious Men in Black, hoping one day to join them. Eventually, she hits paydirt but on a probationary basis and MIB leader O (Emma Thompson) assigns her to MIB London where she meets their leader, High T (Neeson), and their top agent, H (Hemsworth), who’s lost his way and at this point is coasting on his past success. Molly, now Agent M, pairs up with H to protect an important alien visitor, Vungus, but when Vungus ends up murdered, M works out that there has to be a mole within MIB. I like the cloak and dagger aspect brought to this new Men in Black. The space oddity coolness is long gone and this franchise will never feel fresh again, but that doesn’t mean it can’t be entertaining. I always enjoy a good espionage thriller and MIB International imagines its fictional agency as being a lot like MI6 (via James Bond, not John Le Carré). The plot, however, like the franchise is well-worn. One of them is a traitor. That’s interesting enough, but the reveal is fairly obvious if you’ve seen enough movies. It also doesn’t help that there are really only two suspects; one highly suspicious and the other very unlikely. Of course, it’s the latter whodunnit.

Visually, I miss the practical effects of the first Men in Black. It forced the filmmakers to be more creative with their alien designs as well. There was CGI in that film, but not nearly as much as this one. Too many aliens here seem out of place, taken from another movie (John Carter, maybe).

Director, F. Gary Gary (Friday, The Italian Job, The Fate of the Furious), is capable of delivering entertaining fare if not always critically acclaimed works. Men in Black International seems destined for critical rebuke and box office embarrassment. Nobody wanted another Men in Black and this remake would have had to be amazing to overcome all the apathy. It’s not amazing, but I do think it’s good and a worthwhile diversion.