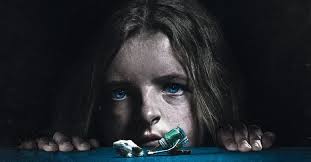 Guilt. Resentment. Strife. Cursed bloodlines. A dysfunctional family. Tragedy. Alas, a nightmare. Hereditary takes its time before becoming a horror flick, and until that point, until its diabolical bloom, I was at a loss as to what the film really was and where it was going. Is it a ghost story? A haunted house movie? The only thing I could firmly grasp was the tangible dread the filmmakers and actors build up so well. A feeling that something horrific was coming, and when it does, Hereditary achieves the status of great modern horror film.

If you’re like me, you’ve noticed the overwhelming praise given to the film by critics across Rotten Tomatoes and Metacritic. If you’re like me, you’ll go into Hereditary skeptical since critics rarely know what they’re talking about when it comes to the Horror genre. The majority of critics don’t like the genre, which is fine, but then what is their review of a horror film worth? To me, this explains why films like The Quiet Place and It Comes at Night do very well critically (fine films but without any actual bite), and legitimately scary genre pieces like Sinister get middling reviews. Thankfully, Hereditary delivers. Not just as a well-made film (a remarkable debut from writer/director Ari Aster), but as a superb, bloodcurdling horror story.

Opening at the funeral of the family matriarch, Ellen, her daughter, Annie Graham (Collette) gives a rather stiff eulogy revealing a strained relationship with her mother, and setting up the rest of the film which, as evidenced by its title, has much to do with family legacy and “visiting the sins of the father on the children,” or, in this case, the sins of the mother. Annie, a successful miniaturist artist has a patient husband, Steve (Byrne) and two children: a distant son, Peter (Wolff) and a daughter, Charlie (Shapiro). After a shocking incident, and I don’t want to say too much since I went in blind and was blown away by this particular scene, the Graham family is forced to live past a tragedy that lays a pall over their lives. Annie reluctantly seeks comfort in group meetings, but quickly gives up on the venture before meeting Joan (Dowd), an older woman grieving over a lost son. Joan turns Annie on to séances, and, naturally, this opens the door for evil and the ensuing horror show. It’s at this stage of the film, actually pretty late in the proceedings, that Hereditary becomes less surprising. The last act is an effective but conventional piece of storytelling. What still separates Hereditary from the rest of its kind, even in the end, is director, Aster’s entirely assured pacing which never settles for cheap scares but takes each moment to its peak horror and then wades on to the next set piece. He gives his actors long takes to work with, and they reward him with likely the best performances of the year. The story belongs to Toni Collette’s Annie, and Collette getting a rare starring role, is outstanding. She’s made a career out of playing mothers across a number of genres, but that hasn’t kept her from proving to be an incredible chameleon-like actor at times. Consider, this is the Australian actress who played the caring, American mother in The Sixth Sense, the kooky British mother in About a Boy, and the frayed matriarch of the hilariously dysfunctional family in Little Miss Sunshine. Consider too, her ultra-creepy performance in the underrated Night Listener starring Robin Williams. I’m simply a fan. Relatively new to me is Alex Wolff who plays the troubled son. I’ve seen him recently in the Jumanji reboot, but nothing to prepare me for the depth he gives to this role. He’s largely the character we’re most often asked to identify with, and it’s through his eyes, we see much of the tragedy and the horror. The ending works for me, but at the same time, is derivative of past classics like Rosemary’s Baby and the recent triumph, The Witch.

Finally, I’m still unsure as to what really went on in this film. I have more questions than answers.  I recognize the themes of persistent discord. Generations of parents and children at odds. I see the toll of tragedy on a family. How much of the blame seems to fall back on the mother? But what’s clearest of all is the talent of the young filmmaker, the impressive cast (I hadn’t mentioned Ann Dowd yet whose sensational in a performance likely inspired by Ruth Gordon in, again, Rosemary’s Baby), and the haunting account of evil that lasts beyond the closing credits.