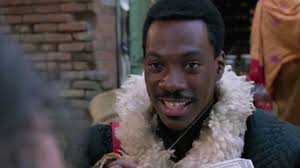 Despite making money, The Golden Child is pretty universally disliked, or at least remembered (if remembered at all) as a stinker. Its star, Eddie Murphy, even admitted that it wasn’t very good. He plays Chandler Jarrell, a kind, urban detective dedicated to finding missing children. He gets dragged into a case tracking down the mysterious Golden Child, a Tibetan boy (played by a girl, I’ve just discovered) with mystical powers, captured by the evil Sardo Numpsa (Dance). With help from the beautiful Kee Nang (Lewis), Jarrell travels to Nepal in order to save the boy. I wonder why I like this movie. Is there enough to recommend it as a good film despite what others think? No. It has a charismatic but unfunny lead performance from Murphy, amusing but terrible special effects, and a lackluster climax. I enjoy the scenery, the darkness, the over-the-top violence, and those special effects I said were terrible. The Golden Child is a guilty pleasure.

One thought on “The Golden Child (1986, Directed by Michael Ritchie) English 5”