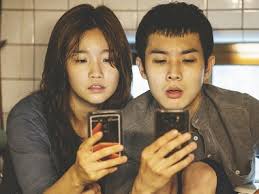 Meet the Kims: the father, Ki-taek (Song), the mother, Chung Sook (Jang), the son, Ki-woo (Choi), and the daughter, Ki-jung (Park). A loving family of four. A classic family unit. They have a whole lot going for them. They’re a devoted group. The children are both attractive. They’re all intelligent and charismatic (the latter two qualities manifesting themselves as their story progresses), and yet, when we first meet the Kims, they’re living in some kind of damp, underground dwelling with the city’s sewage as a neighbor.  There’s never an explanation for how they ended up here. The opening scene shows the children wandering around the not-so-cozy cave trying to freeload off of someone nearby’s wi-fi, finally hitting pay dirt in the farthest corner of their bathroom, tucked in next to the toilet. The Kim family is a part of the lower-class. Parasite makes that point abundantly clear from the outset in over-the-top comedic fashion, setting the tone for the rest of this absurd, explosive, clever, surprising satire.

Naturally, the Kims are given a counterpoint. Ki-woo, with the recommendation of a friend, takes a job as an English tutor to Da-hye (Jung), a member of the beautiful and wealthy Park family. Her father (Lee), simply referred to as Mr. Park throughout, works some kush, corner office job. Her mother, Yeon-kyo (Cho), is a homemaker. Her younger brother, Da-song, is an energetic, artistic boy with an affinity for American Indian culture. The Parks, too, are a loving family of four. Classic family unit. Parasite’s first act unfolds as the unemployed Kims cleverly, one-by-one, become employed in the Park’s household. Ki-woo gets his sister a job as Da-song’s art teacher. She gets her father a job as Mr. Park’s driver, and her father gets her mother a job as the Park’s housekeeper. How they manage this is one of Parasite’s great pleasures. Knowing (at least at this point) what the film was doing and watching it play out provided huge laughs. The problem, though, is that the Kims get their jobs by pretending not to know each other. If you’re thinking that this might explode in their faces later, I’d say it’s a very minor spoiler to say that you’re right. How it happens and not that it happens is the surprise and what makes Parasite special.

I don’t think it’s a coincidence that writer-director Bong Joon-ho made both families mirror images of each other (one upper-class and the other lower), or that he gave both families the two most common Korean surnames. The interesting touch to me though, as I’ve pointed to briefly before, is that both families are attractive. The Parks are younger. The parents look like models, but it’s not as if the lower-class Kims look like cave trolls compared to the upper-class Parks. Nor are the Parks more intelligent than the Kims. In fact, as the film plays out, the Kims are clearly more intelligent. The Parks are very trusting. They are completely dependent on their servants, and I think you could say that their servants are too dependent on each other, maybe even their phones demonstrated in the opening scene. On top of that, there’s a surprise character that needs help from another person just to survive. Overdependency seems to me to be one of the culprits of both the Parks’ and the Kims’ downfall because their outcomes are nearly identical. Knowing that makes me question the film’s title. Not that it isn’t appropriate, but who exactly are the parasites? Which family is using the other more? Who’s benefiting more at the expense of the other? I think it’s not as clear cut as you would guess in the beginning. Then the surprise character, part of a third family, I won’t mention who they are, but they play a huge role in what happens. I would say that they are all parasites. All three units.

Like Bong Joon-ho’s previous work, Parasite balances a number of tones and revels in straying from the expected path. It’s a comedy built around absurd reactions from its characters, an obvious satire of high and low culture, maybe even a comedy of manners, though, I’m unable to say for certain, since I would need to know more about Korean culture. I do think it went on for another 15 or so minutes after it could have ended. I prefer a blunt, pointed ending over this extended fade out of an epilogue. Aside from that, Parasite is a unique, memorable film that should hold up as one of the year’s best.